2014 saw many firsts for me, both in hobby and real life. One of the firsts was I delved into the world of kickstarter backing. I first saw the Guildball system through many tweets from the warmachine community as the kickstarter went live. A quick browse and it immediately grabbed my attention. If you've not had a look at what the game is about, I'd encourage you to check out their page right here: Guildball.com

If you don't want to read, check this trailer to find out what it's all about.

So, we've got a medieval football(or soccer, if you're across the pond) game. Importantly, there's no tiled board involved. The aesthetics drew me in pretty quickly. The teams are a pretty original concept, which i find a refreshing change. The art work really is king here. The semi-serious semi-cartoon style really sets the tone for the whole game. Sure enough, this project got my backing last March.

Fast forward 10 months and the Steamforged team(The company behind the game) are nearly ready for shipping after a hugely successful, and from what I can tell, organized project. The first demo days were announced this week, the first of which was in Element games in Manchester yesterday. Its only an hour's drive for me, so me and my mate Tom jumped in the car and set off to see how the games plays and meet some of the guys behind the scenes.

To start off, this was the first time I got the see the models up close. The finish on even the metal miniatures is very high quality. The resins are even more crisp.

There was a good selection of the models out on display, though not all were present. It has made me a little sad I didn't upgrade to the resins, but heck, the metals will suit me just fine.

As you can see, some of the models really pack a lot of movement into them. Which fits very well into a football team.

The brewers are team I've pledged for, so I was interested to chat about how they play. Our Demo guy Max was happy to explain all.


In the guild ball setting, as you can see in the video above, The union run the whole show. They have extra players that can take to the field for any guild, opening up those combos. They also look like an unwholesome lot. 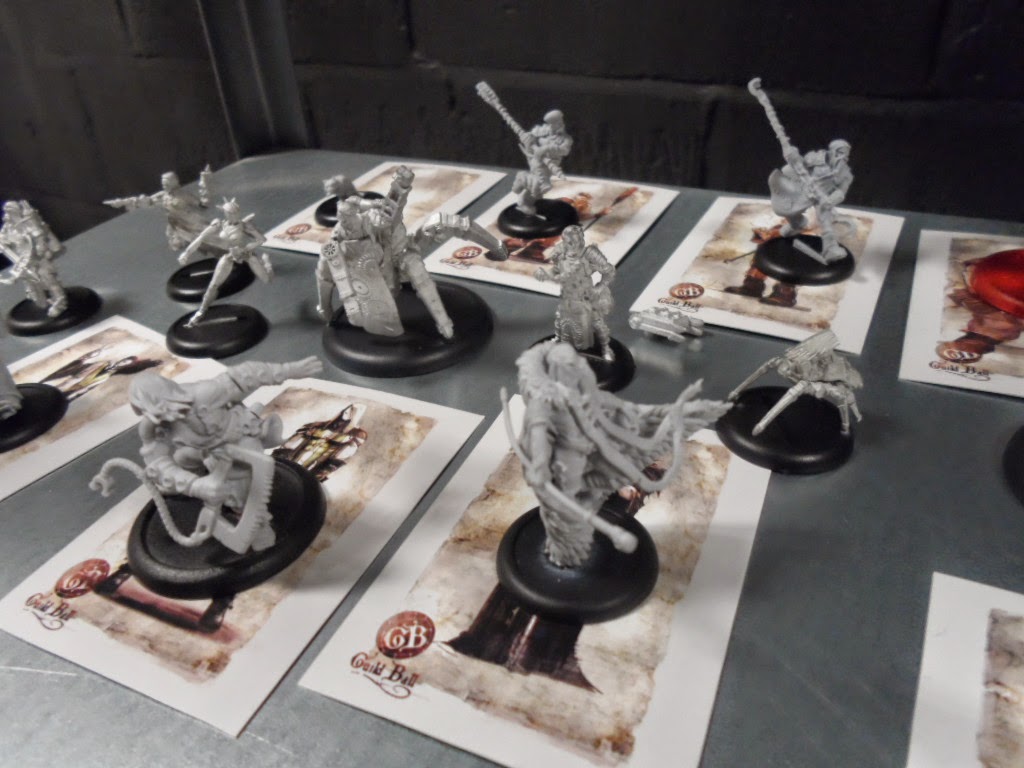 So, once we'd had a look round and watched a couple of games, I had a chat with a certain Rich Loxam, one of the co-writers, about the game. Rich appears to be a top bloke who truly has passion for this game. Even just chatting to him about the game, he didn't dodge any questions, and was very open about the whole thing. Even on the subject of shipping dates. I think this passion the writers have is probably the reason for it running so well.

After we'd had a chat and spot of lunch, it was time to take to the field.
I took control of the butchers, in this instance, the red team(colour coded team helped me a lot!) So for the three man demo, I got, from left to right, Boiler, a winger, Ox, team captain and midfielder, and Brisket, the butchers' only striker.


Meanwhile, Tom took control of the fishermen's guild, or the blue team, for now. From left to right, Siren, Ginger winger, Shark, striker and Team captain and Angel, striker.


So the whole game took us about and hour, maybe a little more, but that was with me asking silly questions all the time and general chatter. I'm sure you could blitz though a game this size in about 40 minutes if you put your mind to it. It's important to note these demo games are half size, a normal game is 6 a side game. Also, the cards were simplified versions of the finished article. Just for learnin'. 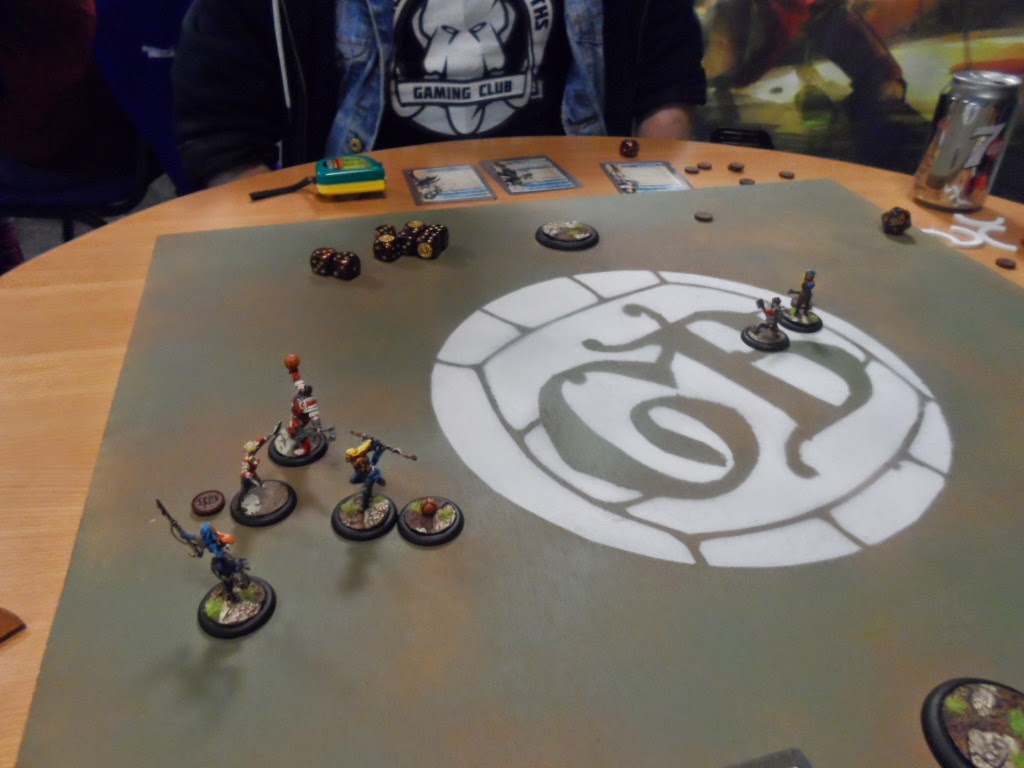 So the game ended with me losing 2-1. Mainly due to my poor dice rolls! Some easy observations I made through out the game: 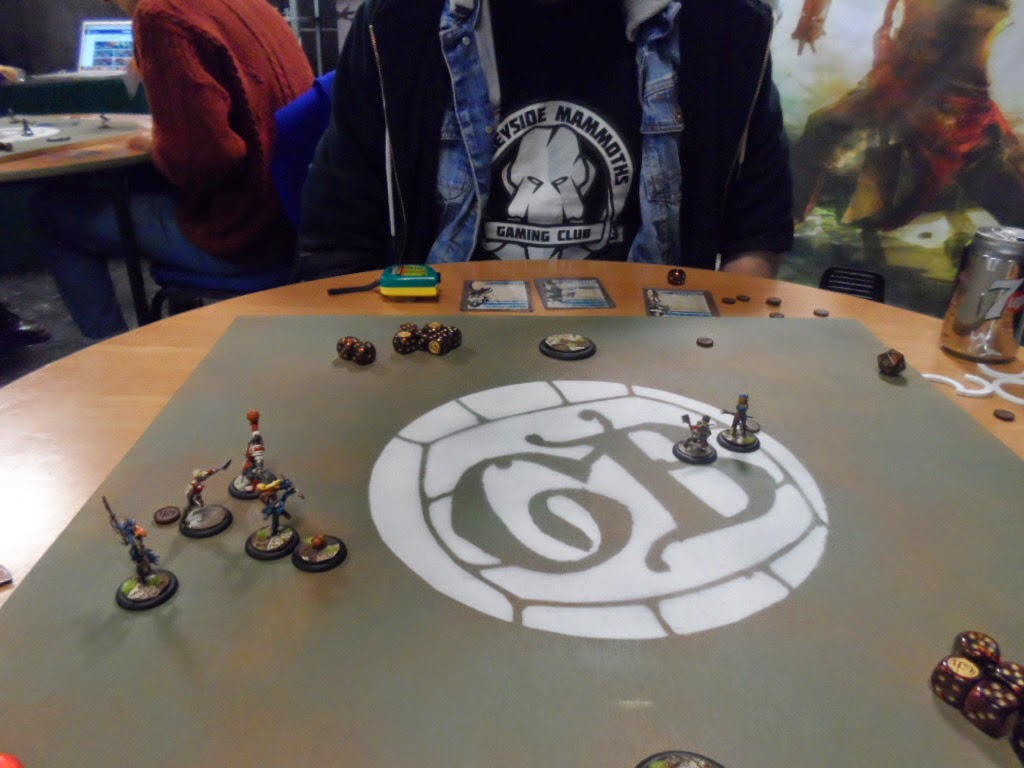 So, now I've have a go, am I sold? The answer is yes I certainly am. I look forward to my teams arriving in the next few weeks. In the meantime, I've got a 3'x3' pitch to be building. The only concern I have for the game, is that is quite expensive. The starter boxes are around the £20 mark, but that only gets you the 3 man starter team. Each other guy is around £8-£9, which can be a stretch for some of the smaller models. I'd be intereting to see if they produce a 2 player starter set at some point.

Overall it was a great day. I'd like to thank Rich and Max for showing us the ropes on the day, and the rest of the team for looking after us with snacks and letting me take some photos. If you want a go yourself, I'll certainly be running a few demos nights down at the Mammoths on Tuesday nights when my stuff has arrived, everyone is welcome to pop down and say hello!

Email ThisBlogThis!Share to TwitterShare to FacebookShare to Pinterest
Labels: Guildball